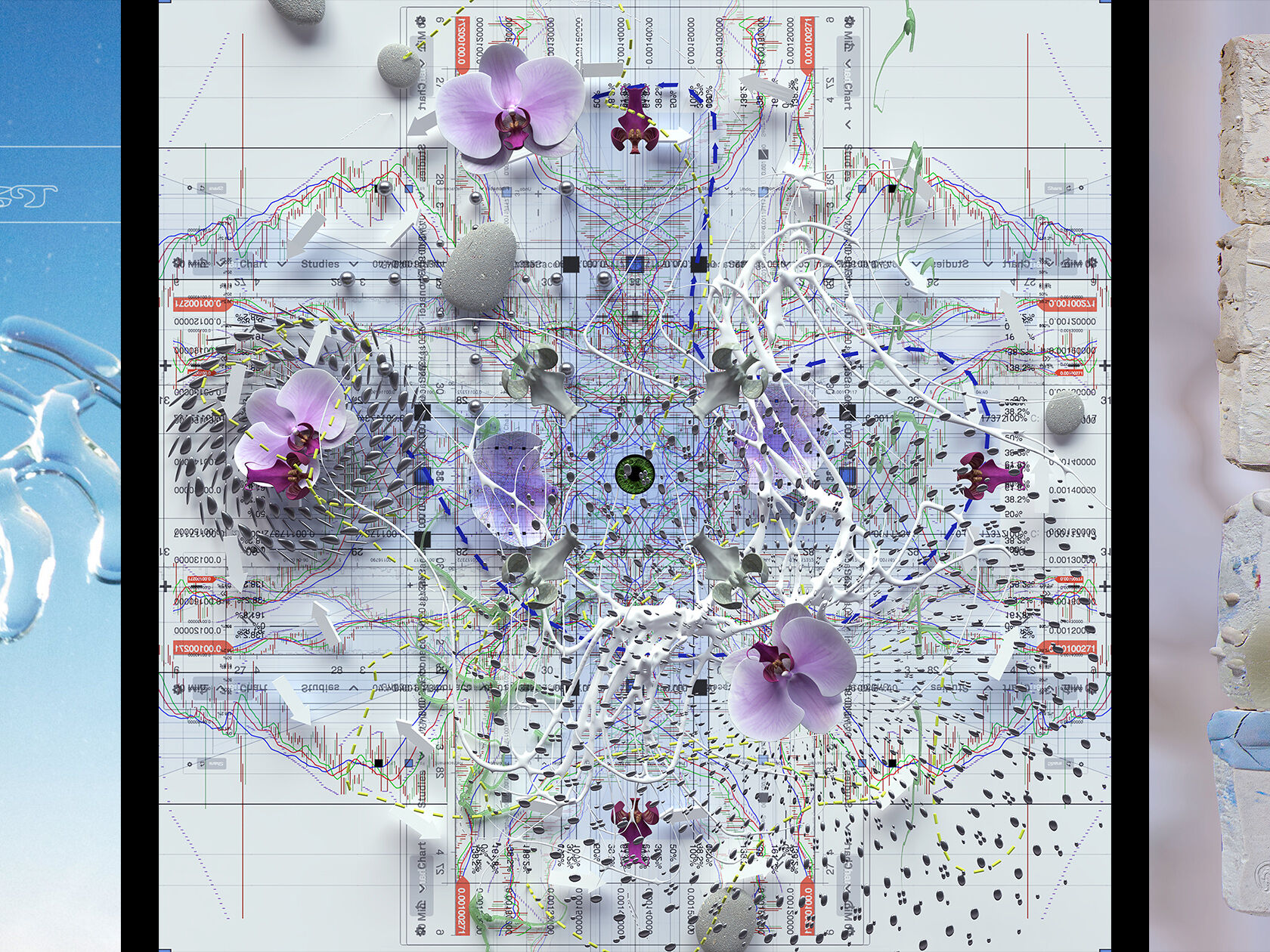 One year after the release of ‘On A Nimbus’, Francis Latreille—better known as Priori—returns with his second album ‘Your Own Power’, once again showing his undeniable talent for creating hypnotic soundscapes and his extensive technological know-how. The multi-faceted album was released via NAFF, the label he co-founded alongside his long-time friend and former musician Adam Feingold, alias Ex-Terrestrial. NAFF is an extension of their musical relationship and friendship—and home to some of the most innovative contemporary music out there, having recently released a string of refreshing records by fellow Canadian artists Ambien Baby, Maara, and URA. Since its inception in 2018, NAFF’s uncompromising releases have shown their eccentrically-tuned ear for curation and until now, the young label shows no signs of stopping.

‘Your Own Power’ is driven by a sense of optimism with a colder, more crystalline sound, giving it a bright and sparkly feeling. It was produced between April and July of 2020, with the lockdown allowing Priori to spend more time in the studio, exploring new instruments and wiring the equipment in new inspiring ways. The isolation and change of pace got him back into more contemplative styles of music, like shoegaze and ambient, which had a big impact on how the album was recorded. Following on from Priori’s ‘Little Flower’ EP from earlier this year in which he used his voice for the first time, the new album is almost entirely made using synthesis. It features a collaborative track between the two Montréal-based artists, entitled ‘The Tower’, which highlights the contemplative quality that defines the album.

In the following interview, the duo talks about the new album, their creative process behind their collaborative track, their introduction to the world of music—and how that, ultimately, led to the foundation of NAFF.

Hey there! Tell us, how did NAFF come to be and what was your motivation behind the label?

Adam: We connected through DJing, raving, and performing at the same venues and parties. I knew of Francis as a DJ and sound engineer and the man with the shimmering red beard. Then he rented a room in my apartment and we started exchanging ideas and techniques and influences, and we started working on things together. I wasn’t totally aware of an underlying concept initially, I was just energized by the openness, the strong creative flow, and the warmth. It felt like a really healthy creative relationship. We pretty quickly ended up with a few solid projects and it just made sense to release them ourselves. We also looked outward to friends and collaborators for music. Francis had some great stuff with Alex Sheaf (Dust-e-1) and it just expanded quickly from there.

Francis: Yeah it just clicked when we met. Adam was coming from a band background and I was just finishing a degree in electro-acoustics so we complemented each other pretty well musically. We were also just excited about a lot of the same sounds, visuals, books, etc. The early NAFF stuff felt like the purest expression of ourselves at the time and what we are putting out now is what we both find exciting presently.

What prompted you to become musicians and how did you come to discover your style and practice?

A: Music was everything to me for a very long time. I started out in bands and got into recording pretty soon after picking up the guitar. I also had a friend who brought me to studio sessions when I was about 16 and that really left a mark, I just caught the bug. I became interested in electronic music as a practice a bit later, in my early 20s; my former bandmates and I dove into synthesis and drum machines and everything else, then raves and DJing. It took me a few years to find my footing but I felt like I had kind of figured some things out by Paraworld, the first ext release on 1080p. That release laid the foundation for the next few records, which more or less live in the same universe. With ‘Gamma Infolded’, I found a way to get more granular with sound, a sort of hyper-zoom approach which was really exciting at the time. It was a very different emotional and sonic space, quite dark and alienated, like everything was disintegrating. I’m more about integration and wholeness now, so we’ll see where that leads.

F: I got interested in DJing and producing as a teenager. I would dedicate all my time outside of school to reading about music and trying to score some cheap gear on the local classified ads. I was jamming a lot but wasn’t happy with what I was making until I met Patrick Holland. We made the first Jump Source record together and it gave me the confidence to put out some of my own tunes. I moved in with Adam shortly after and we started jamming every day. We had two studios in the house but the door was always open. We were constantly bouncing ideas back and forth and friends were coming over and really feeding that process. It only became a full-time job for me in the last 2-3 years when I started mixing other people’s music.

Francis, let’s talk about your upcoming album on NAFF, ‘Your Own Power’. What inspired you for this new album?

F: I don’t think I would have written that album if it wasn’t for the pandemic. The Montreal winters are pretty rough and the lockdown meant the only way to stay busy was to hunker down in the studio. I started building a modular system again and making a new set of songs. From the start I knew I wanted to try and write an electronica album with a shoegaze approach, using FX chains and clouds of sound. It took about a year on and off to polish it.

When comparing your first record from 2020 ‘On a Nimbus’ with your current compositions now in 2021, how would you describe your personal and musical development?

F: I think my thoughts are less scattered now. ‘Nimbus’ has a bit of a restless feel to it I think and the new one might be more focused. Also, I used quite a bit of sampling on the first album, but I made a point of crafting every sound on the new one, including drums.

A: This question isn’t for me but I’d like to chime in anyway since I’ve had a chance to watch Francis grow as an artist for a while. ‘On A Nimbus’ is a huge record, it has so much in it that you can go back and find something new each time. The new one is an even deeper and more refined articulation of his vision; there’s more clarity, richness, and subtlety than before. It’s a testament to his growth as an artist and person. It’s a really beautiful work.

Can you talk us through the creative process behind your collaborative track on the album, ‘The Tower’? How did the song come to life?

F: The first element that we recorded for this is the ghostly chant/pad. Our friend Matt Salasiak let us use his PPG Wave a long time ago and I got so fascinated with the tones, especially how ‘vocal’ some of the patches were. I pulled out these recordings more recently when Adam was at the studio and we started layering some other synths. The weird bubbly sounds are from a Prophet 6, which is the one synth I turn on every time I’m in the studio. For the longest time, we didn’t really know what to do with that song but I thought it would be a good fit on the album and Adam agreed.

Can you tell us more about the design of the album cover?

F: The album art is by an Ontario-based artist named Matt Cangiano. I had been following Matt’s output for a long time. When I finished writing the album and looked at his art it just clicked. It just looked like a visual representation of the sounds to me. My friend Elly Gasparetto did the rest of the design and it tied everything together.

Whose music is released on NAFF and why?

A: I love ‘Healion’. It’s a real conversation; there’s a playfulness and a call-and-response between Francis and me that works really well. It’s also a good exercise in controlled chaos; it’s always on the verge of breaking, but never does completely.

URA’s ‘Blue’ is also incredible to me, an exquisite exercise in texture and time-shaping. Such a warm and drippy mood, and touches on so many things that we’re about.

F: Yeah URA is untouchable. Really excited about some of the upcoming stuff. An artist named Cousin from Australia sent us some material and it’s stunning. We are pretty attached to everything we put out and it goes beyond the music. I didn’t really know Maara when she sent us demos but we became really good friends in the process. Same with Aly Kotchekov who designs our merch and Jesse Osborne who does a lot of the art. I’m really thankful for those bonds.

What does working collaboratively bring you that you couldn’t do alone?

F: I think the most significant movements in art involve(d) a collective or a group of people developing something together. Every time I have had successful collaborations I’ve made strides in my practice.

A: Agreed, a good collaboration is an enriching experience in many ways.

What can we expect to see from you in the next months? Anything in the pipeline?

A: I’m quite excited for this rap project we have coming out soon.

F: Same. There’s also a remix ep of ‘Your Own Power’ coming out soon. Some activity on Garmo too.