MaggZ is a Melbourne-based movement and multidisciplinary artist specialized in wracking, a freestyle dance originated in 1970s LA from the LGTBQ community, predominantly involving arm movements. Traversing amongst dance battles, live performances, installations, and interdisciplinary collaborations with other artists, MaggZ aspires to explore the possibilities of art and creativity whilst to honor the unique being of self and others.

With a strong focus on art and illustration and a very conceptual approach, Sandra Britz is inspired by all the thing surrounding her. In her work, she likes to experiment and find unexpected ideas through creating new things from scratch. During her studies at the University of Applied Sciences in Mainz, she spent an exchange semester in England, where she immersed herself in research, reflection, and experimentation in the field of illustration. Almost all her personal work is related to nature and climate issues.

Antonia Gangi is an emerging interdisciplinary artist from Melbourne, motivated by social impact and positive discourse. Her medium of the moment is poetry in written and spoken form. She likes to combine media fragments and archival footage with contrasting contemporary words to challenge what we see and what we think we know.

Johanna Invrea is a visual artists from Italy. While she has earned a degree in industrial design, her work spans across various disciplines and media, like video and digital art, CGI, photography, and sculpture. With a specific interest in the human body, she explores the connection between real and virtual worlds and their overlaps.

Felix Neumann, aka SeeBelieveProduce, is a multidisciplinary designer and artist working on the fringes of communication design. His practice functions as an intermediate membrane, it established a threshold and lets the stream flow through. On the threshold of an age of attentive capital, he chooses to deliberately buy in and go bankrupt with attention for the purchase of seemingly useless, contextless information.

An exploration of the tension between nature, humanity and technology

During our first digital residency which took place from April 29 to May 12, 2021, the five artists MaggZ, Sandra Britz, Antonia Gangi, Johanna Invrea, and Felix Neumann played with the intertwinement—and contrariety—between nature and technologies, real-life and digital tales.

The project VOLATILE which was initiated by Melbourne-based movement and multidisciplinary artist MaggZ, explores the process of rapid deterioration and the return of homeostasis. The theme emerges from the experience of being in isolation during 2020, when humankind went through both internal and external turmoil as a collective, in the cycle of volatility: from initial decline, through deterioration, to peak deterioration before a return to homeostasis. Within the framework of the project, MaggZ collaborates with artists from all around the globe, spanning different disciplines, like CGI, graphic design, photography, and more. VOLATILE prompts these artists to examine how and why the experience is occurring and more importantly to embrace the discomfort of such experiences. It encourages them to explore how to return to deeper intentions and purposes, as such, how volatility and creativity can ultimately drive us towards a realization within: what is aliveness?

During her digital residency at C24, MaggZ joined forces with visual artist Johanna Invrea, writer Antonia Gangi, and the two designers Sandra Britz and Felix Neumann, to continue the series. The digital residency was split into two parts, starting with the collaboration between Johanna and MaggZ in the first week. The three resulting artworks explore the intertwinement between humanity and nature, imagining nature like a big magnet that attracts and shatters the human body towards itself. The never-ending exchange between these two entities—nature and body—can be seen as a return to Romanticism. 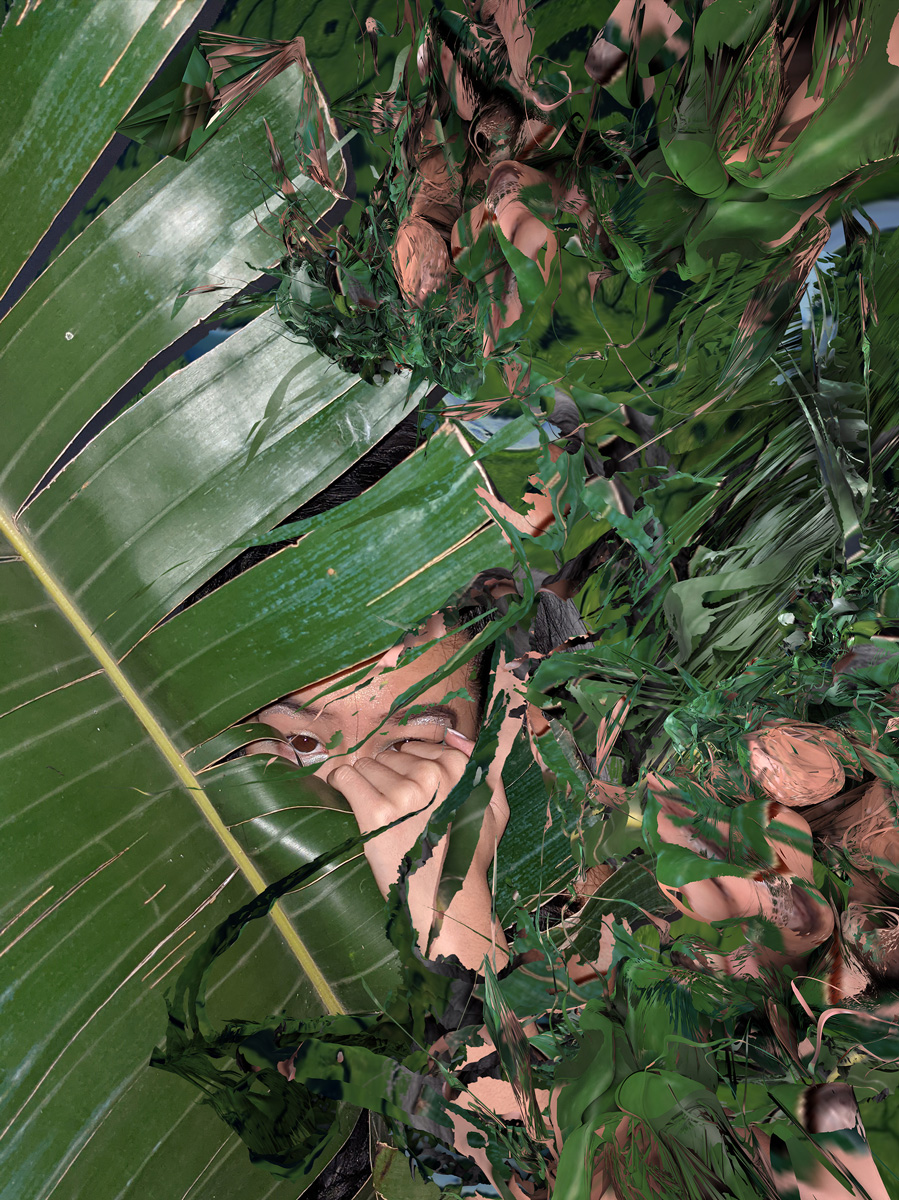 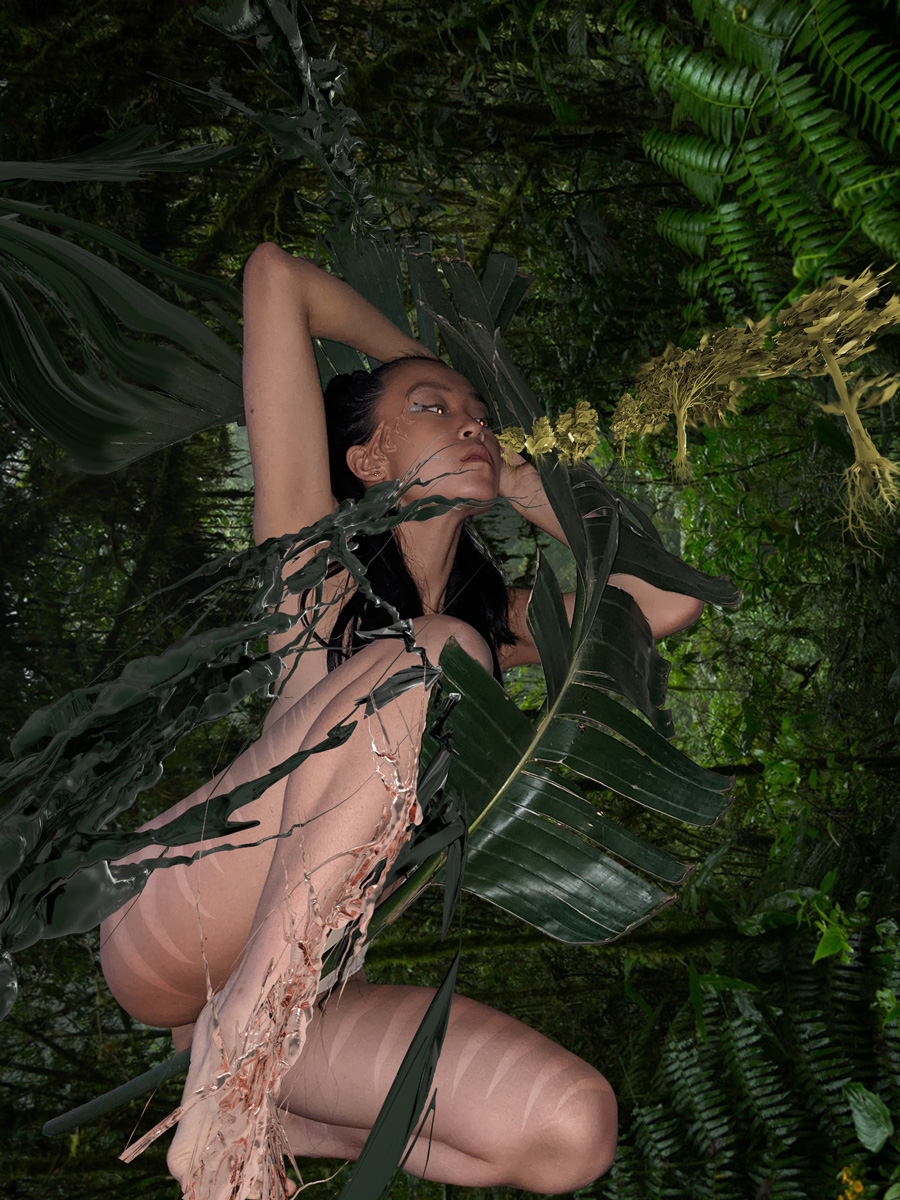 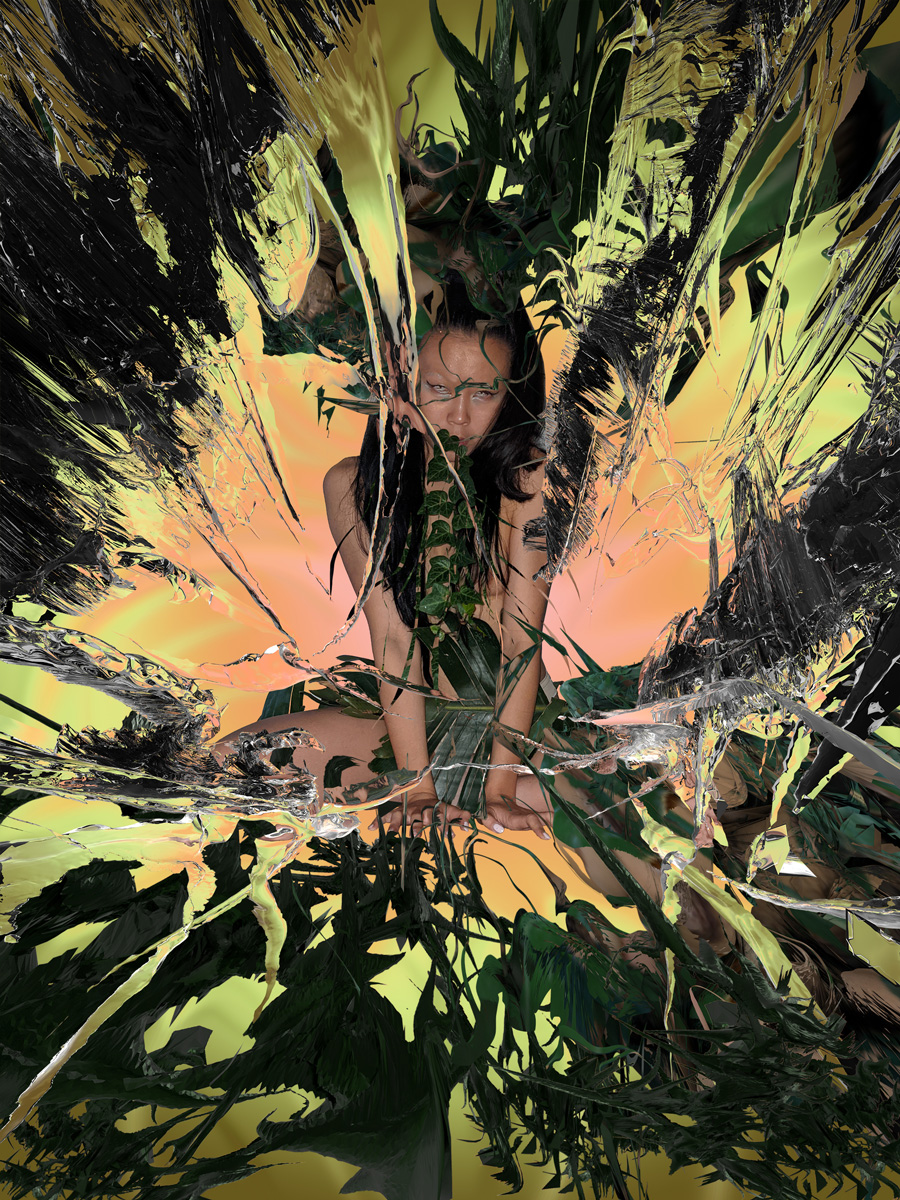 In the second part, Sandra, Antonia, and Felix created an animation based on the precedent artworks of Johanna and MaggZ, combining poetry, motion design, sound, performance, and 3D design within one project. “As we all worked under the same theme, a lot of our initial ideas overlapped and we naturally explored similar genres,” Antonia explains, “I think the major difference was the style of art we produced, some softer, some harsher. However, the different mediums complement each other by exaggerating important themes. Also by using common motifs and a consistent backing track the audience can still follow a linear journey in an abstract world we created.” Even before knowing each other, the four artists had similar ideas, drawing upon the concept behind the artworks and taking up the same symbolism and themes.

“Nature and technology are not as contradictory as one might think. If you think about it for a bit, every technical device has its origins in natural resources”, Sandra states, and Felix adds: “Digitality opens a great portal to a new form of escapism. Digital space and dream space are so crazily intertwined because they’re both man-made and there’s the possibility of being subconsciously present in both. We have simply brought the concept of Romantic perception to the present time and reinterpreted the fairytales and mystics of paintings for us as the generation with the shortest attention span ever.” While Sandra and Felix concentrated on sound, visuals, and motion design, Antonia wrote a poem on the theme which explores the nature of us and the earth, and how it is deteriorating, but forever being birthed.

Expanding and altering the theme of VOLATILE, the poem seeks to cause discomfort in a dream-like space. The form it takes is fluid and moving, but at the same time challenges coherence through its jarring and amusing tone. “The poem gains new meaning in conjunction with sound and design,” Antonia concludes. “The audience isn’t solely left to their imaginations to decode the sentiment but rather they are shown it. It becomes a passive experience rather than an active one. Due to the abstract nature of our work, the audience will still have unique takeaways but the theme is clearer when paired with visual elements. The additional sound evokes an uncomfortable feeling, one that challenges the listener and creates a specific atmosphere that words can’t do alone.”

“When Antonia sent the finished audio of the poem, Felix and I worked really close on the visuals. He created the dreamlike space right away whereas I spent more time on research and came up with new ideas, which made him come up with new ideas and so on”, Sandra talks us through their process. “When we got the movement video from MaggZ, I was already in the middle of a visual romantic universe and mixed those thoughts with her explanation to the video, and we incorporated it in the animation.” In the animation, sound plays an important role in story-telling and conveying emotions. The voice distortion in the reading of the poem is a clear contradiction to the soft music, emphasizing the parallels of nature and digital intelligence.

For the animation, Sandra and Felix built three different worlds that are constantly evolving. The first one is a dynamic organism living in an isolated room. The second one is a mix between dream and reality, but also a connection between the past, present, and future. The third and last one is an open black space with fragments and an almost invisible, transcendental energy that manipulates the space through its actions. “I think our statement is rather coded and the result plays more with a feeling than with a direct message,” Felix explains. “For me, the of homeostasis and the eternal back and forth oscillation in the interplay with Antonia’s spoken words opens a mystical space in search of equilibrium. The fragments and mirrored spaces address the vulnerability and impermanence of the system. I believe that we have created a work that hopefully, even if in an abstract way, contains space for the idea of a social change that cannot take place without an attack on existing systems.”

The animation draws a lot upon Romanticism, which had a great impact on our perception of the relationship between humanity and nature. The blue flower from the novel ‘Heinrich von Ofterdingen’ by Novalis is considered to be the central symbol of this literary movement—and plays a major part in the animation. “The blue flower is not just a plant. It symbolizes the connection of people and nature and stands for transcendent union with the universe and the climax of the organic continuum”, Sandra explains, “The flower is part of the dynamic system that we see in the beginning and the end. Although it fluctuates quite heavily and is loaded with the energy of the whole universe it is locked and isolated in a white room which is how the involuntary social isolation in 2020 felt to a lot of us. It is speaking to us and introduces us to the dreamland that we are about to enter which is where we return to homeostasis internally.”

Despite the fact that five strangers living in completely different parts of the world took on the challenge to work together for the very first time, this multidisciplinary collaboration became an absolute masterpiece, merges various disciplines, backgrounds, skills, and ideas.“The funny thing is that it never really felt like we were coming together from different disciplines. It felt more like working together on one mutual idea”, Felix concludes. “We couldn’t meet physically, so we needed to trust each other right from the start, without actually knowing one another.” Right from the start, all of the artists involved shared a similar approach and the same motivation level, leading to a smooth and fruitful process. “This residency gave me the freedom to write without restrictions but saw it turn into something I could never achieve on my own”, Antonia reflects, “My experience was so enjoyable. I want to work like this every day, collaborating with people of different disciplines has been the most rewarding aspect as it gave us never-ending opportunities.”

Visit our Live Q+A with MaggZ