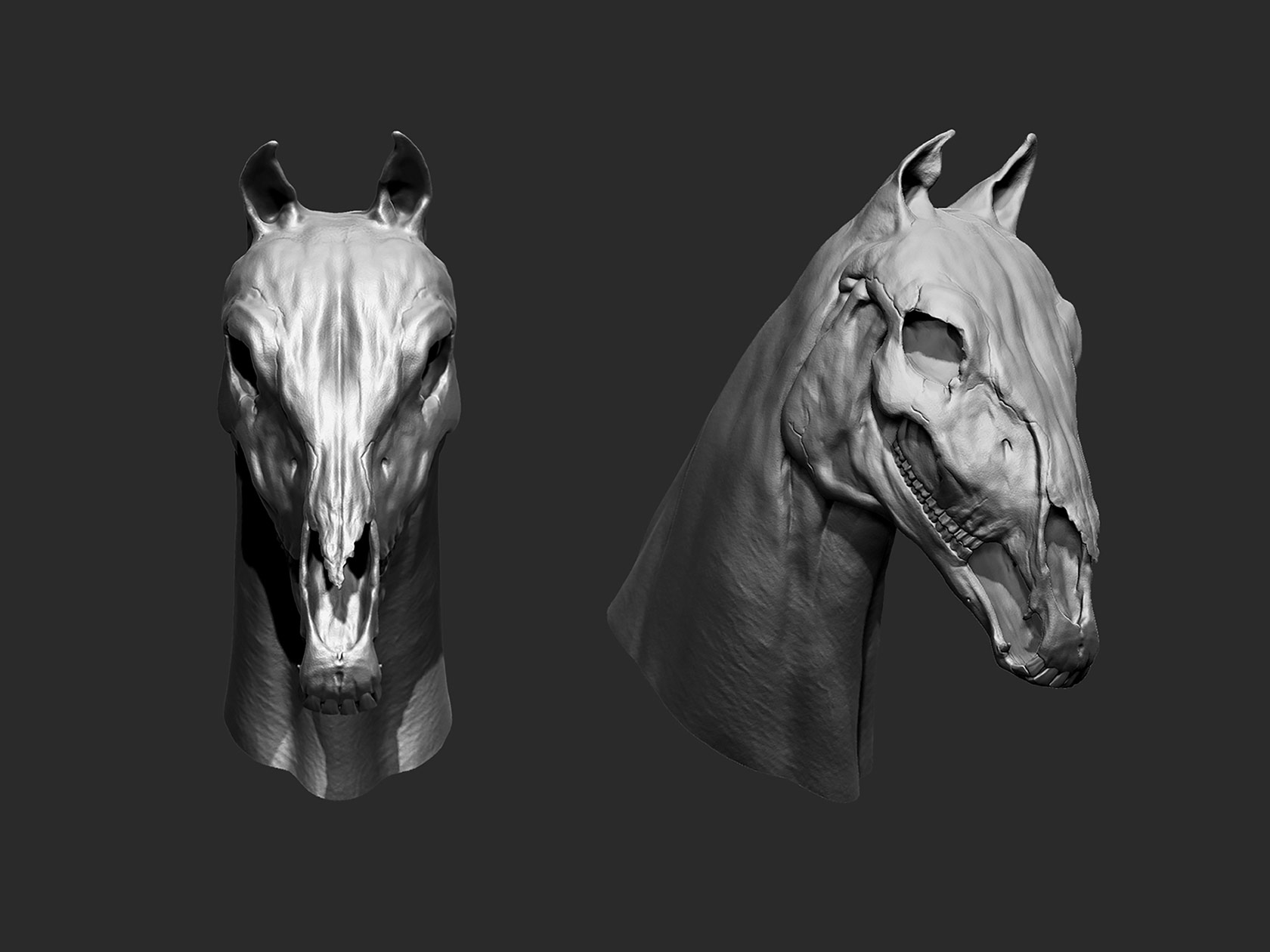 After spending lots of late nights in their shared studio space in Sydney, talking about design, work and just life in general, James Jirat Patradoon and Jonathan Watkins came up with the idea of combining their different styles in one artwork. While Jonathan specializes in animation and 3D sculpture currently working in the VFX industry in London, James’s practice spans across various mediums, like paintings, murals, animation, sculpture and illustration. “I really wanted to translate one of James’s works into 3D and ensure that it still had his sensibilities about it”, Jonathan tells C24. After deciding on a big drawing by James, he began to develop this artwork into 3D, resulting in the animation “Acceleration Waltz”. As the original drawing – a group of horses repeated across the composition – was full of dynamic energy, the duo came up with the idea to make them cascade in a loop. “It’s way better than the original work, I feel like the original work was just like a quick sketch compared to how it ended up in 3D”, James concludes.

James’s artwork was originally part of the Bodyache exhibition at Goodspace. The Sydney based gallery space hosts weekly exhibitions from local and international artists. “The exhibition was made up of really big drawings made on black tarps. I was interested in exploring a gallery space in a less traditional, clean, white-walled-cube way, so I had the lights turned out, it was lit by flashing strobes, and the space was filled with smoke from a smoke machine and a throbbing industrial soundtrack”, the Bangkok based artist reflects, “So often art is just experienced on a screen and scrolled past, so when I do an exhibition I want to really create a setting for the work to be experienced in and be memorable.” The imagery itself was a bit of a deviation from James’s usual work, incorporating a lot more repetition, an animated projection and unfinished pieces. The title of the artwork was inspired by the composition “Acceleration Waltz” by Johan Strauss, which worked well with the imagery of James’s work.

In order to capture and translate the overall atmosphere that James created through his artwork, Jonathan decided to interpret the inverted way the original painting was drawn as having light come from the inside of the skull and to sync it with the lightening in the scene. “I think James’s work is so unique, he creates his own world and mythos. It’s like a dream state. Every piece of James’s is a glimpse into that campy, horror world he’s created. I feel ‘Acceleration Waltz’ is a further development of that. With the 3D adaption I really wanted to capture that atmosphere and try and bring the viewer further into that world”, Jonathan tells us. In the beginning of the 3D adaptation, the designer started with sculpting the main subject of the artwork, the Horse. In order to get all the proportions as natural as possible, Jonathan created a living horse first before reducing it to a skull. Once the Horse was sculpted and posed, he experimented with a number of different composition, before ending up with the carousel. 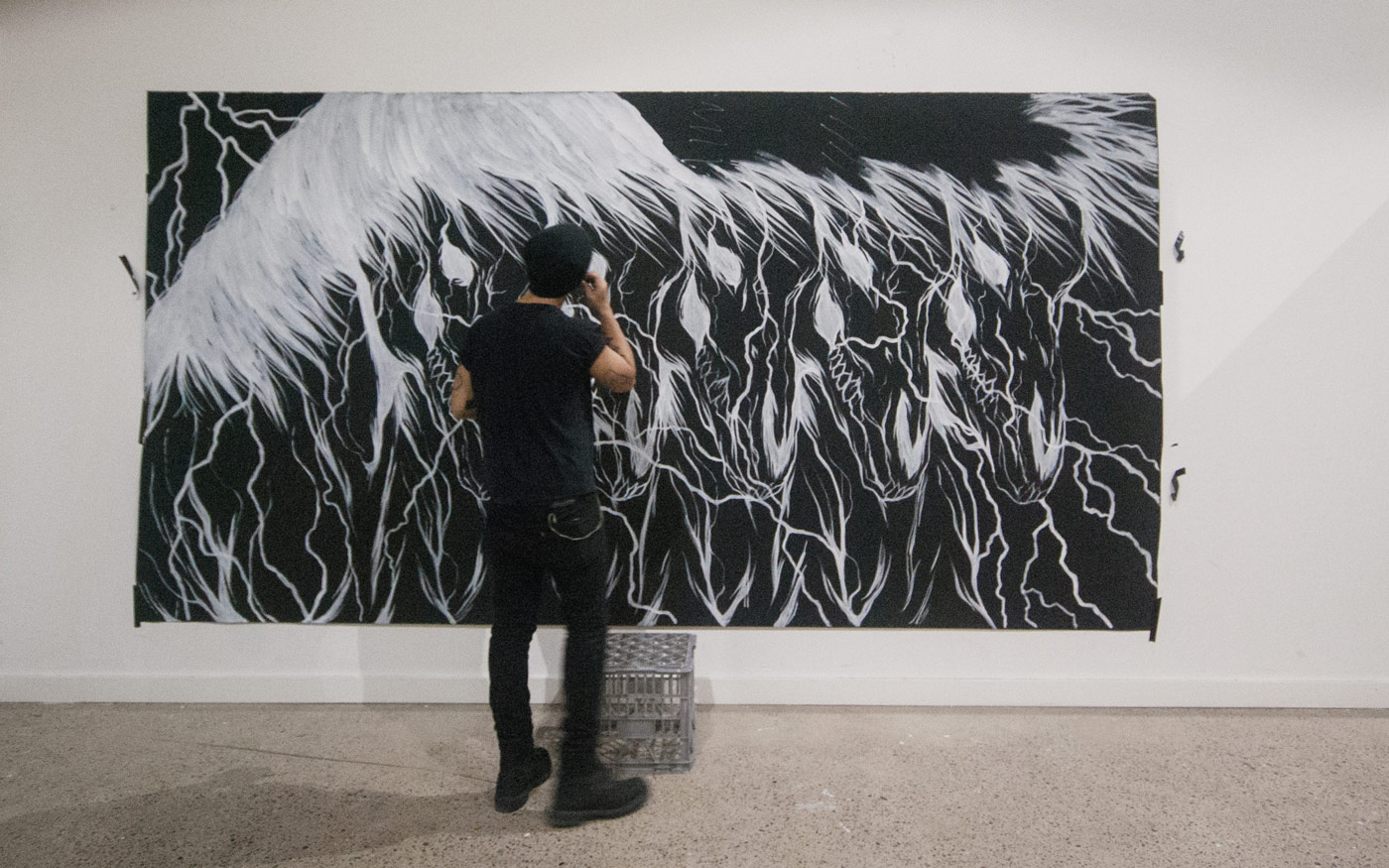 As Jonathan was new to simulating hair, the mane of the horse was definitely the biggest challenge during the project. “Creating the mane was by far the most time consuming as hair simulation can be very complex and cpu intensive. I was using Xgen in Maya and I found it really temperamental and I would lose work all the time” Jonathan explains, “I had to set up guide curves to tell Maya where I wanted the Hair to generate, then I set up my simulation to obey a bunch of rules like gravity, wind turbulence, weight, thickness and had to tell it to collide with the horses body. If you don’t set these rules up just right the hair just flies around going crazy. Also I ended up having to create one version of the hair and composite onto each looping horse because my computer couldn’t cope with each horse having its own unique hair simulation.”

As James usually works only by himself, it was a completely new experience for him to entrust another artist with his artwork. “I never really do it. I’m a massive control freak and often I’m just doing my own thing as an artist. I have pretty specific ideas for what I want and what I think will look good and I generally like to spare people from that really fussy and bossy side of myself to be honest, like my creative vision should just be my problem. I’d like to think I left Jonathan to his own thing but whenever he came back to me with what he had worked on I do remember being a pain in the ass and nitpicking a lot”, he jokes. Maybe for this very reason, it was so important to Jonathan to make sure the final animation stayed true to James original intention and get his feedback from time to time. “I think it was the first time one of his pieces had been created in 3D so I felt it was important to make sure it was still a Jirat piece even though it was in 3D. We tried lots of different compositions to translate the 2D composition into a moving image and that all came from iterating and discussing what was working and what wasn’t.”

While clearly seeing the benefits of collaboration as a practice, the duo agrees that certain projects are better done on your own. “You can get your ideas realized quicker when you don’t have to design by committee. But sometimes collaboration is essential. Collaboration is almost always necessary in Animation and VFX because there are so many specializations. I’m looking to do more collaboration to help bring some of my ideas to life”, Jonathan concludes. In the past few years, the designer has worked on a bundle of new projects often rooted in the field of music, including his work for Flume, Club Tularosa or Safia. “When I’m creating music videos and stage visuals my style is very stylized and psychedelic and then my character in sculpting is always either sci-fi or horror/folklore. So in general I’d describe it as fantastic escapism: I’d rather be somewhere else and I’m trying to create that.”

“The essence of a collaboration is for people to be able to create things that they never could have on their own, everyone brings a certain something”, James adds on the matter, “Like if not for Jonathan, this would never have existed in this form at all, I wouldn’t even have thought of doing it in 3D, so for that I am incredibly grateful to him for taking a chance and being patient with me.” As in every good cooperation, trusting and being honest with each other was very important for them during their process. “If you don’t trust the other person then you aren’t going to take feedback or advice well and you may start to butt heads”, Jonathan explains, “If you aren’t honest when giving feedback then you aren’t going to get the best work in the end. Sometimes its better to be harsh and honest rather than treading on eggshells because you are afraid of hurting their feelings.”

In the current times of self-isolation and the lockdown, James continues to toil on his personal work and self-initiated projects, without having to worry about the pressure of taking on freelance jobs and commissioned work. “I came back to Sydney for a quick visit and now I’m stuck here and will likely be here for a while. It has kind of been a creative paradise for me and I’ve been the most productive I’ve ever been. I was meant to have an exhibition at this nightclub in Bangkok so maybe I can take what I’ve made over and show it there when this dies down,  but right now I’m really enjoying just keeping my head down and drawing”, he tells us.

Like many other artists, Jonathan struggles with the effects of the self-isolation instead. “Isolation is tough for me, I don’t feel like I am creating as much work as I would like right now. I can’t seem to focus as much as I would like. When I am working, I’m creating a lot of character sculpts these days, Aliens and folklore creatures mainly. Just practicing and developing my skills and having fun with it”, he explains, and then adds: “There are potentially some more collaborations with James in the future, too.” 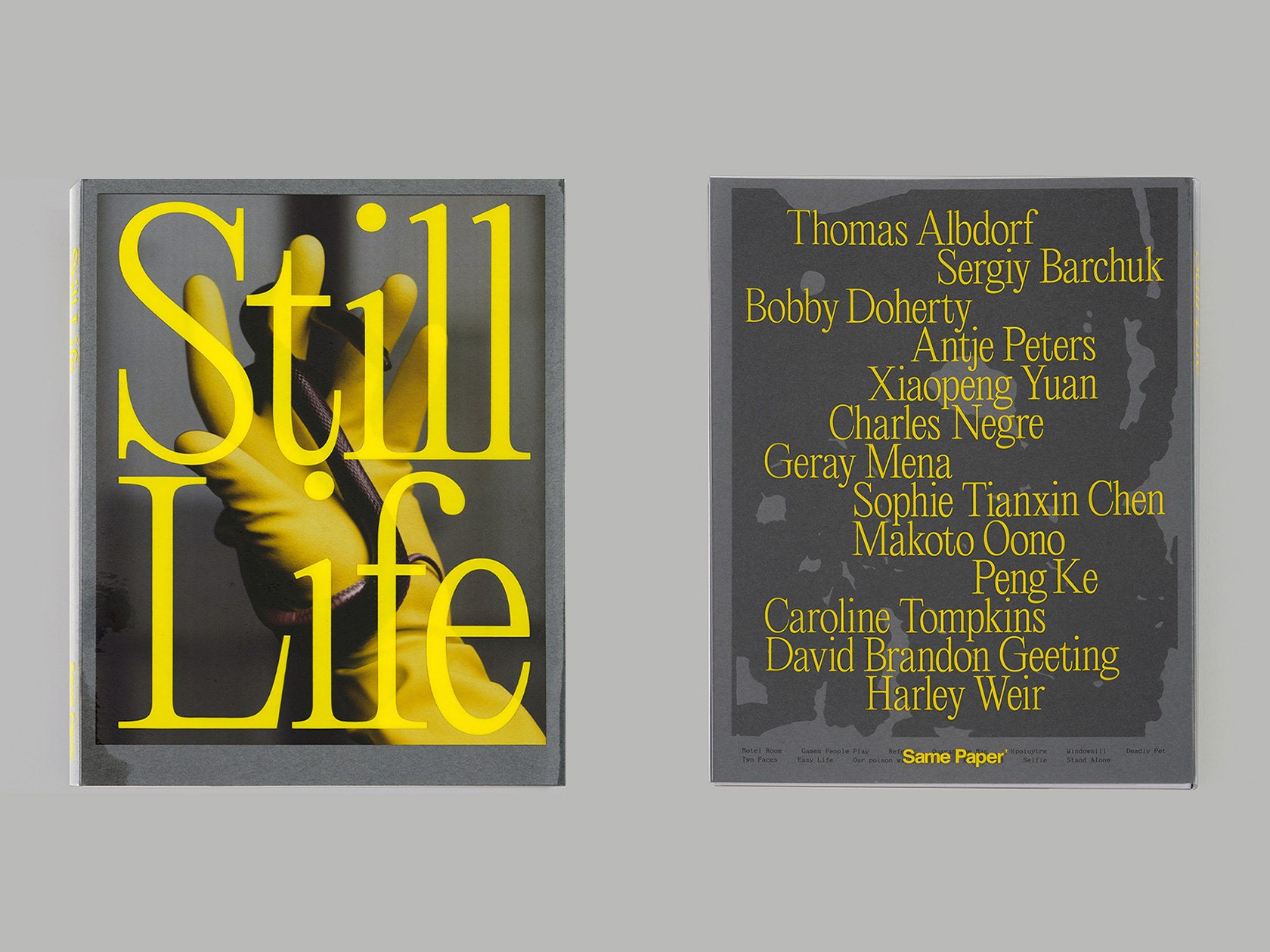 The book Still Life, published by Same Paper and designed by Han Gao, invites thirteen photographers to reflect on the medium in times of the pandemic
Same Paper 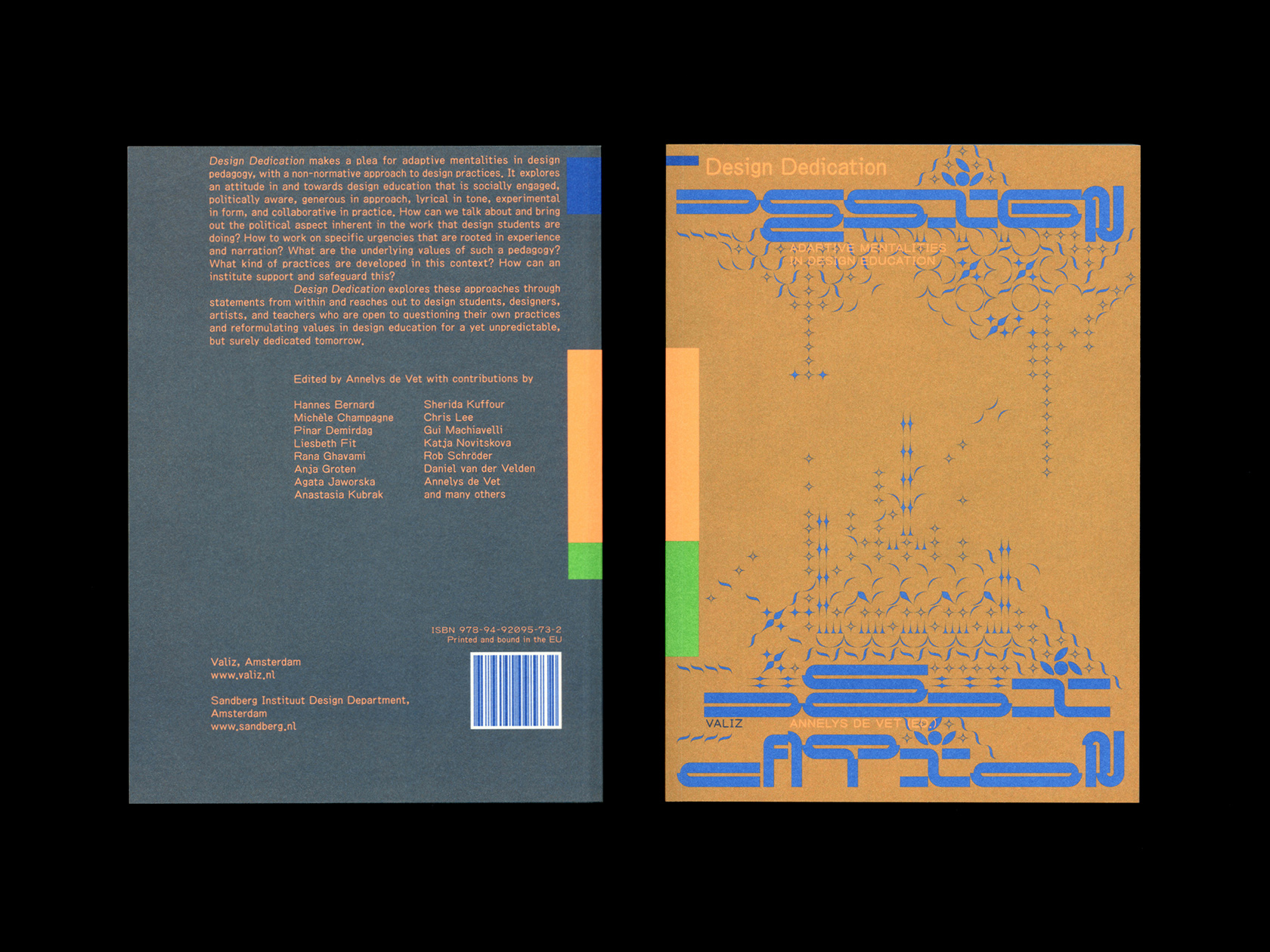 Tessa Meeus and Alex Walker talk us through the creative process behind the book ‘Design Dedication’, edited by Annelys de Vet and published by Valiz
Tessa Meeus, Alex Walker