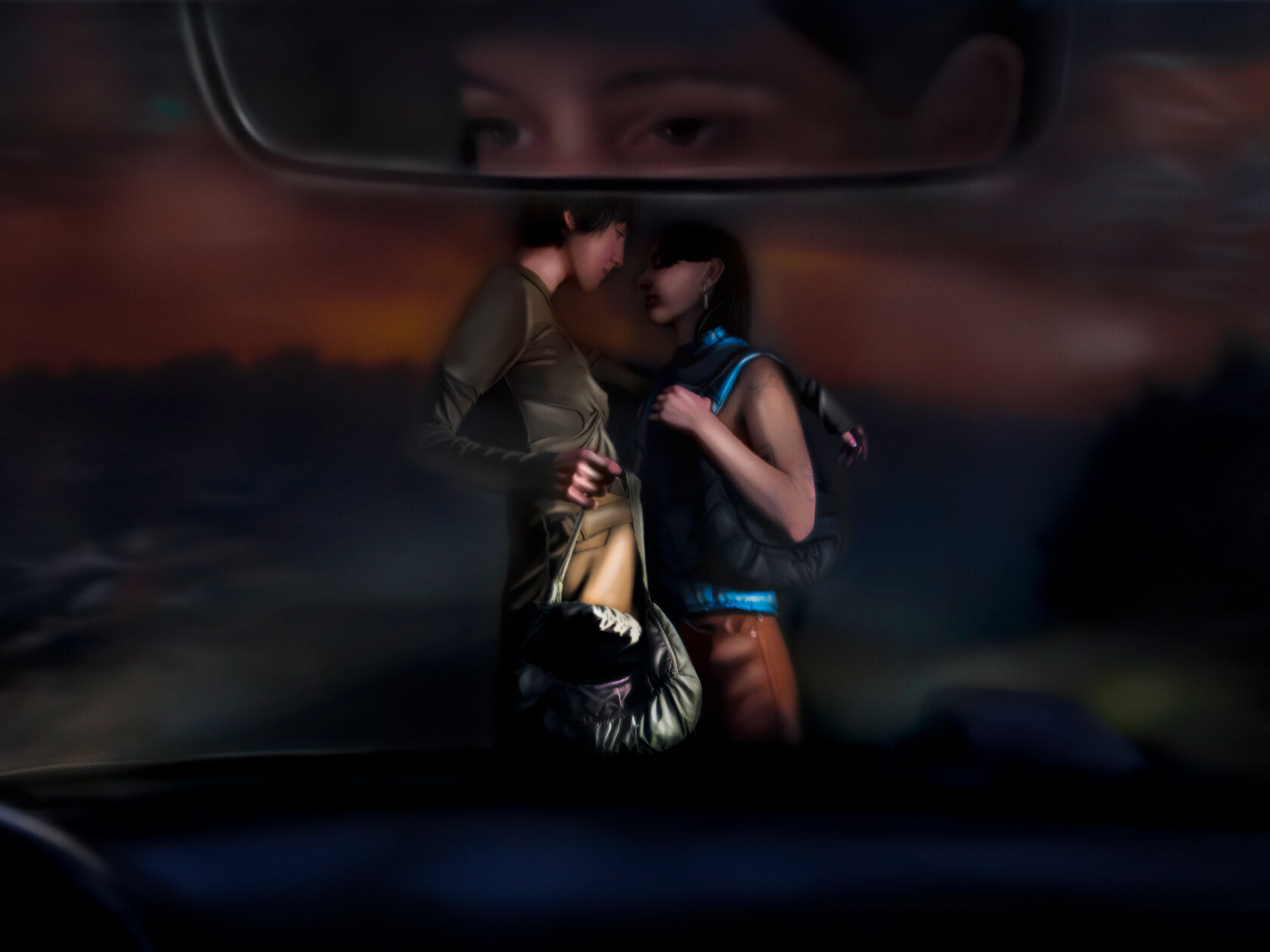 Blurring the line between photography and digital painting, the project “Soft Shoulder” by Sara Bastai and Inés Maestre reflects on the sense of movement and transit. The series features products of the London-based collective and brand Mainline:RUS/Fr.CA/DE merging the cultural settings of its three founders Alexandra Vincent, Karl Felix, and Zarina Bekerova. Hailing from Montreal, Vladivostok, and Bavaria, the three creative directors behind the collective were brought to London by chance and are now collectively working together on radical, often upcycled fashion collections. Inspired by this intercultural dialogue, Sara and Inés became interested in the idea of the journey as a metaphor. In the series of images “Soft Shoulder”, the car is the firm centerpiece of the composition, while the rest of the setting—characters, landscapes, and season—changes and transforms. The series was named after the soft, unpaved ground along the edge of highways, where vehicles are only allowed to stop in an emergency, yet also chosen due to its poetic association with the human body.

Meant to create confusion, “Soft Shoulder” hovers between photography and digital painting, exploring the relationship between the two disciplines. By combining different tools and techniques, the images become more abstract and vague, almost surrealistic. ”Somehow, we managed to create something unexpected. We enjoy other people’s reactions, as they usually have a hard time figuring out how we achieved this effect. We wanted to create images that tell stories, taking the viewer to another universe”, Sara tells us.

Inés and Sara first met during their studies at ECAL, University of Art and Design in Lausanne. In their shared flat, they had many conversations around the dinner table about visual art, life, and what inspires them, leading to their first collaboration for jewelry designer Zelda Passini, called “Unchained Melody”. “This is normally where our projects start, with a random chit-chat at lunch or while shopping together for groceries”, Sara tells us. Inspired by their pool of cinematographic references, their projects usually build on strong storylines, often capturing the dreamy, beautiful side of the mundane.

Since we last wrote about her project “Gel Illusions” in 2020, Sara has earned her master’s degree in photography from ECAL and has since been working as a teaching assistant at the college. Next to commissional jobs for exciting clients, she has showcased her work in several exhibitions within Switzerland and has worked on a bundle of new collaborations and projects. In the collaborations with Inés, Sara is in charge of the photography, while the magic comes together in the post-production and retouching by Inés. Growing up in Spain, the visual artist has always been fascinated by painting. As soon as she began to experiment with mixing traditional and digital techniques during her studies in fashion, everything seemed to fall into place. “Sometimes, what feels limiting at first, can help you discover new possibilities,” Inés states.

However, the two artists are equally involved in the art direction, styling, and set design during their photo shoots. “Together, we can create images with photographic qualities that are very close to reality, but then translate them into digital paintings. By collaborating, we blur the line between the two mediums and, in doing so, our two individual practices. This allows us to create something we couldn’t have created on our own”, Inés tells us.

What once started with meaningful conversations between two friends around the dinner table, has now turned into a fruitful long-term collaboration. The creative duo has recently celebrated the release of their art series for the Spanish jewelry brand Rígido, reflecting on the obsession with new technologies and materialism in Western societies. The resulting images are captivating and leave us hoping for more collaborations to come out of these two.

COLLABORATIONS TO LOOK AT:
Off Course Circulation III by Delphine Lejeune and Cleo Tsw