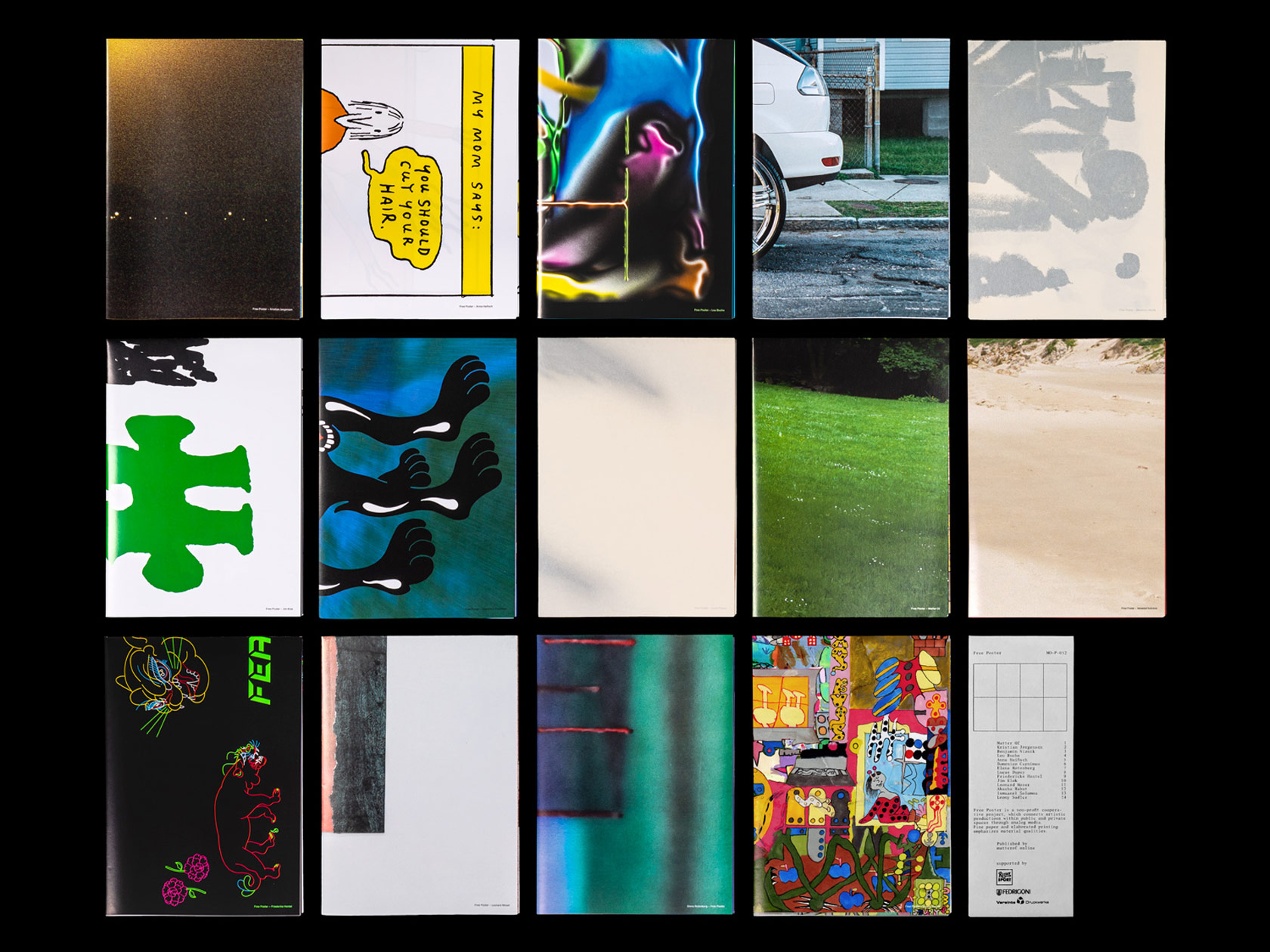 Graffiti, Skateboarding and Music has been their introduction into the world of graphic design, awakening their interests in books, album artworks and cultural issues. A few years later, Adrian Riemann, Fabian Schewe, Marcel Mendler and Marian Rupp have founded Matter Of, a Stuttgart based design studio with a strong focus on transdisciplinary practices.“It feels like a logic progression from loving the graphic on your favorite T-shirt to start creating your own things”, Matter Of tell Collide24. After their design studies in Stuttgart where the four designers met each other and working in the industry for a while, they felt like it was the right moment “to form their own practice.” Apart from several commercial projects on the go, among them the Lookbook 020 for Montana Cans or the exhibition concept for Museum Hegel-Haus in Stuttgart, the studio never lost sight of its self-initiated projects. Recently, they have celebrated the release of one of those projects, called “Free Poster”, a non-profit cooperative poster series connecting artistic productions within public and private spaces through analog media. Some of you may have already guessed it: the name of the project says it all. In order to make the artworks available to everyone, Matter Of decided to offer the posters free of charge in their online shop.

How does your dynamic work as a studio? Do you take on specific roles when it comes to projects?

We work as equals, with no specific roles.

Anna Haifisch, Kristian Jørgensen, Lou Buche, Friederike Hantel, Benjamin Niznik, Lucas Dupuy, Leonard Moser, Ismaaeel Solomon, Jim Klok, Elena Rotenberg, Domenico Carnimeo, Akasha Rabut and Leomy Sadler are the great names behind this collaborative project by Matter Of. By inviting those talented, contemporary artists to contribute a poster for the series, the projects gives a platform for the exchange of current themes and debates. “Many artists, whom we find interesting, often sit on good material, which does not grow beyond a digital post on instagram”, Matter Of conclude. The presented artworks on the posters range from photographies and 3d Art to illustrations and drawings. “The works that can be seen on the posters reflect a spectrum of artists whom we find interesting. Some of them are friends of ours or artists who’s works we have always wanted to have as a poster – without a thematic focus.”

Apart from connecting different artists from various creative backgrounds, the project formed a cooperative network between paper manufacturers, printers, graphic designers and sponsors. Contrary to the total renunciation of printed products in climatic crises, Matter Of aims at creating a new sensibility that gives weight to the haptic experience and the crafting of materiality. “We wanted to create a more sustainable solution for images that quickly get lost in the stream of the feed. As graphic designers with a great affection for analog media, even if they are simple flyers, postcards, stickers or like in this case folded posters, it was important to us to have a medium that was deliberately produced contrary to fast pace of digital realms”, they explain.

What was the biggest challenge during this collaboration?

Before they threw themselves fully into the project, the four designers took their time to reflect on the idea, asking themselves “if it is even worth pursuing”. After testing and finalizing their concept, they started looking for partners and sponsors – and got supported by Ritter Sport, Fedrigoni Fine Papers and VD Vereinte Druckwerke in the end. “It’s usually a lot of persuading you have to do, and your idea gets challenged – a solid concept helps here”, Matter Of explain. As soon as they had enough partners on board, they started the production of the posters.

While the posters can be ordered online, they are also meant to be displayed widely and free of charge in reopened facilities and bookstores. “The poster itself is a mobile medium that has no fixed home, but is intended to find one through its scattered presentation”, Matter Of say, “Folded down, it can be distributed easily, when unfolded it has a size big enough to represent the artwork properly. When the corona-pandemic started and the galleries closed, ‘home’ and the possibilities of having a gallery on paper, that can be delivered to your private space for the shipping costs, found new meanings.” With this forward-thinking project, Matter Of addresses not only the sustainability of printed matter and analogue media, they also contribute to improving the current situation, by making art and culture available to the public again.

How important is collaboration to you as a design practice?

Usually you design something for someone else – so collaboration is an inherent part of nearly every design-process. Through our selection and role as curators, “Free Poster” shares images and connects artists with an audience, possible clients and enhances their role. Collaborations create visibility through multiplication.

With their current work being undeniably contemporary in design and practice, make sure you keep an eye on Matter Of in the following months as the studio works on a ton of new releases that you won’t want to miss. Looking to the future, they will release their most comprehensive book this fall, a complete archive of art in the public space of Stuttgart. Apart from a few upcoming collaborations on products for their online shop, including a shirt with the Swedish illustrator FINSTA, they also plan on reviving their label FUN TIME, a research project that explores the subcultures and music scenes of the 90s and 2000s. Something to look forward to for sure!