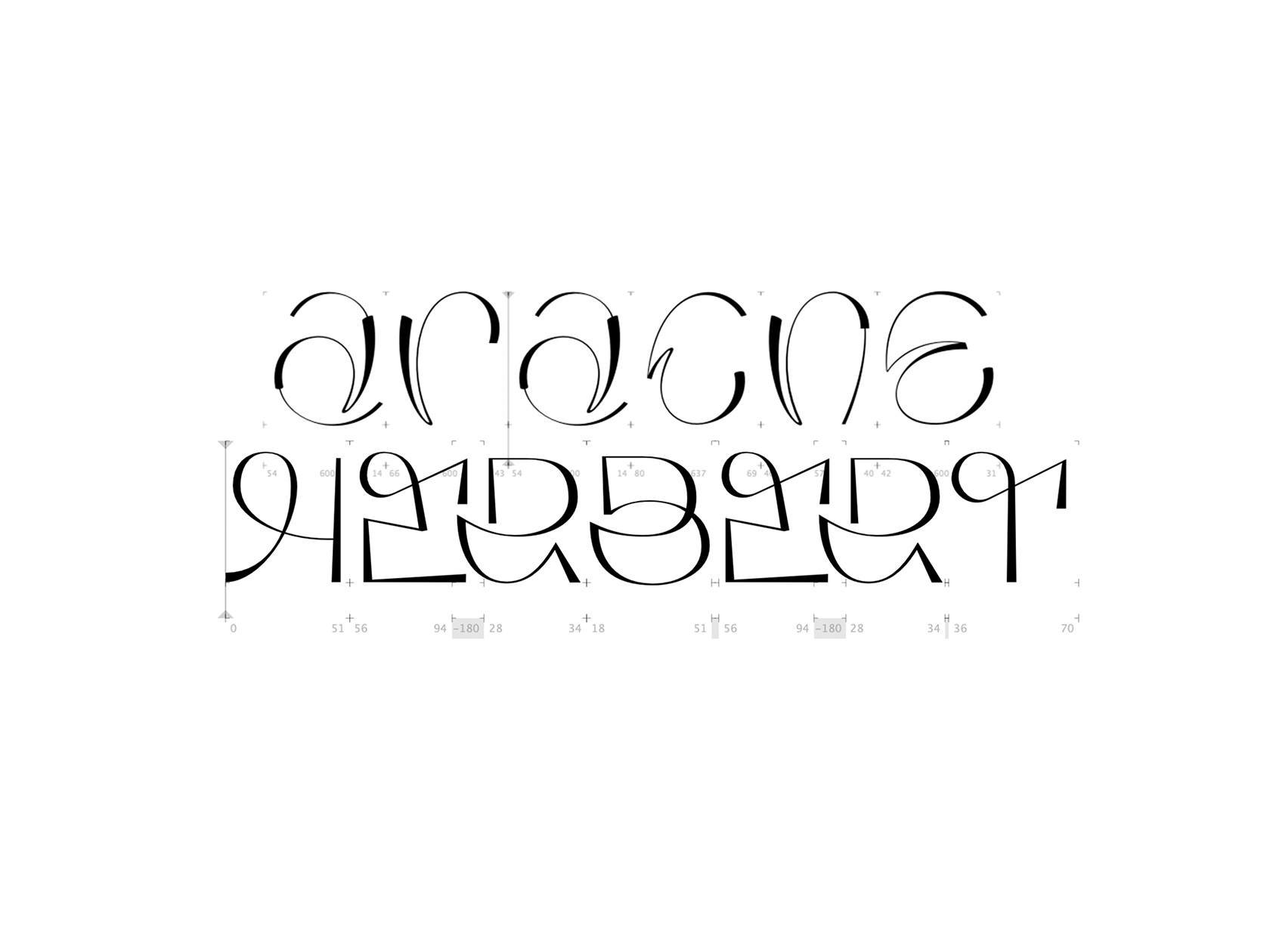 Collaborations do not necessarily have to end with working together on the same result, they can also begin with the same starting point. After meeting during a Type Design Course in Milan, Matteo Bettini and Carolina Festa were so impressed by each others work that they decided to work on new typefaces together. The interesting thing is: while each of the two typefaces in based on the same research they were doing together, they have chosen to split afterwards and work on each typeface independently. “At some point, mainly for reasons due to work deadlines and exams, we couldn’t meet so often but we turned this little trouble into an exciting challenge, choosing to work in parallel, but separately, on two different versions. We were curious about the two different interpretations coming out of our common visual research. Now we’re constantly sharing the progress with each other, giving each-other advices.” The results of this unusual, but quite challenging collaboration are two typefaces that seem to be similar, but surprisingly different at the same time. Sharing the same visual basis, they are interacting with each other in a certain way, but are still leaving space to evolve independently. While Carolina would describe the look of her typeface as “whimsical, conflicting and dancing”, Matteo would depict it as “darkly ornamental“ or “a squashed insect.” 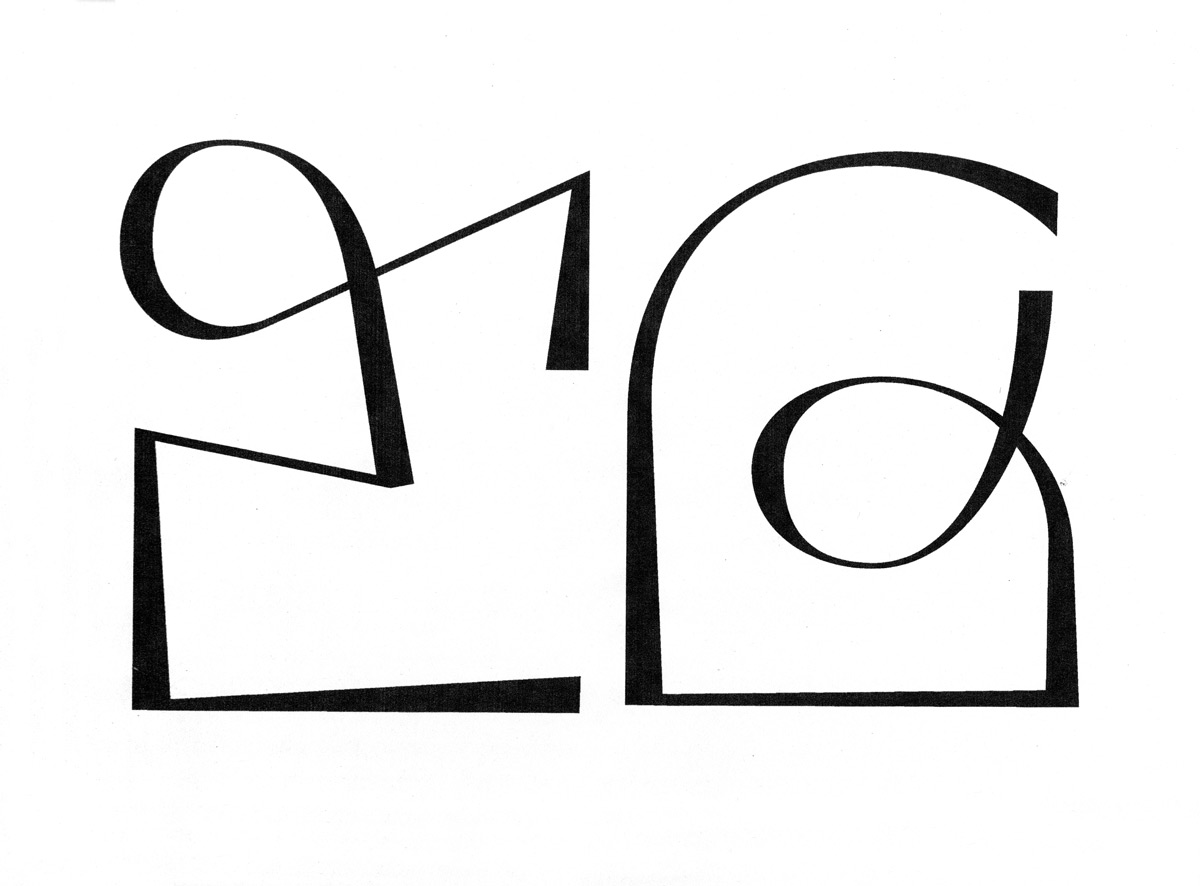 This description of the typeface immediately leads us the concept behind the two typefaces which is actually based on an insect – a spider. The two designers share a quite similar working process, by approaching the actual designing part of the type as faraway as possible from letters or type references. The visual research for the two typefaces started with collecting pictures which did not necessarily need to be related to graphic design or type design at all, but were all visually appealing to them in some way. After analyzing the similarities of the pictures, the idea for their final concept was born. “We found there was a sort of “fil rouge” in the majority of these images, a shared, hidden concept of thin lines and bold terminations, shattered linear shapes. We synthesized all these visual references in a unique written concept, the spider’s nature, in particular a common domestic specie, defined ‚Holocnemus pluchei’ and started to work on our first trial together. These words become the main guideline for the first hand sketches and scribbles and slowly become letters.” 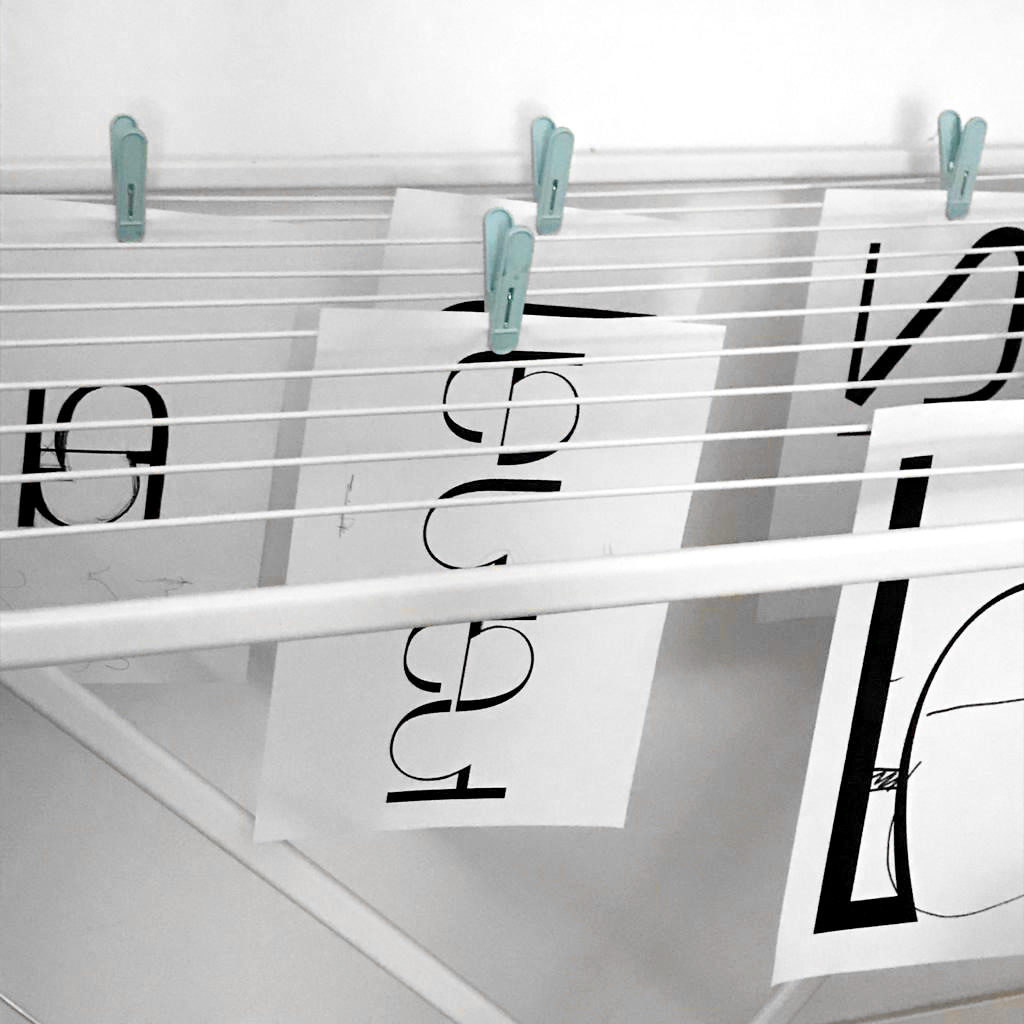 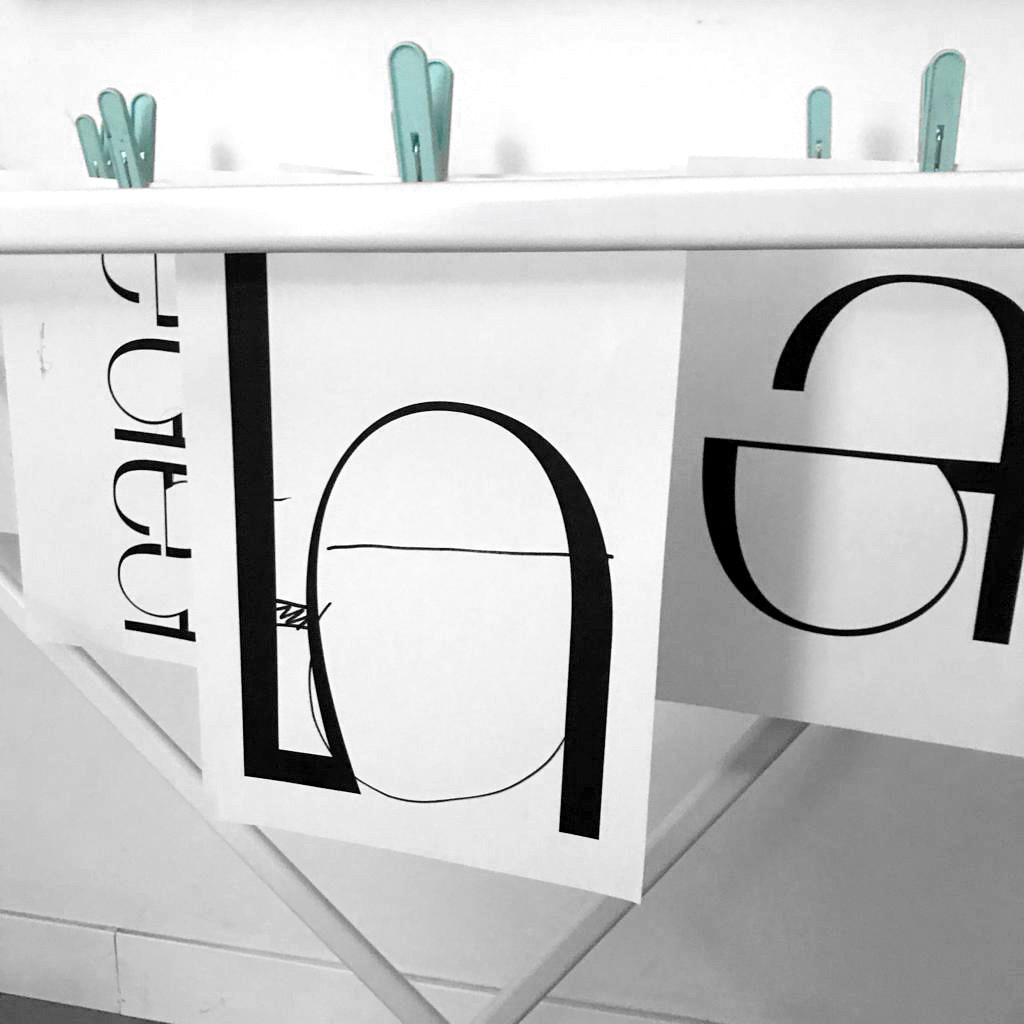 Working at the same time, for the same purpose, with prior rules they determined together, Carolina sees this collaboration as a way to “enhance each others strengths and fill the gaps while working towards a common goal. We know we can rely on each other for advices about all the steps of this project.” While collaborations in general can be “a negotiation and contamination of ideas“ and therefore have their pros and cons, this sort of collaboration gave both of them the chance to preserve their individuality but sharing their strengths, advices and ideas at the same time. “The spider reference is really strong yet allows a big space for experiments on the shapes for both of our versions. We are satisfied with the rules we’re sharing and with the rhythm we’re slowly achieving in both typefaces. Of course there are still lots of adjustments to do and discrepancies to sort out.” 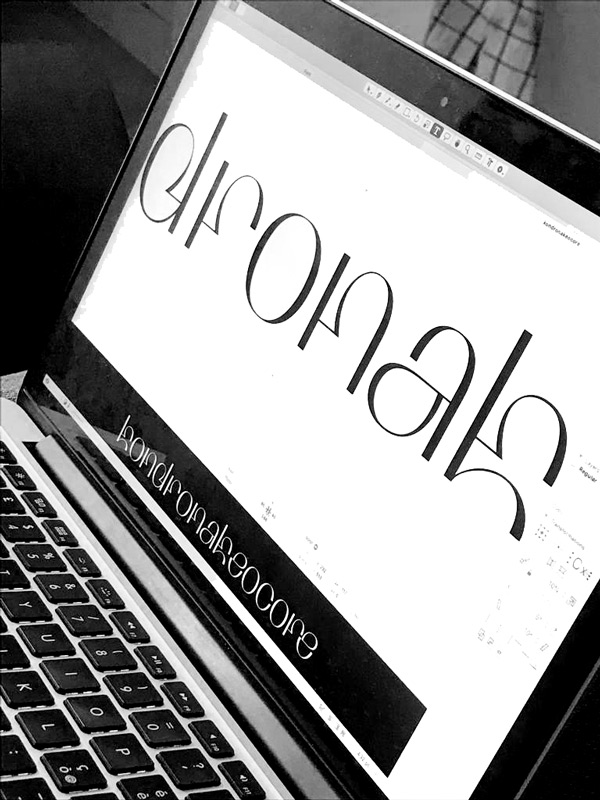 Before working as an Editorial Art Director in Milan and pursuing her own creative projects, Carolina has always been interested in the concept of traces, signs and symbology made by humans since the ancient times. Out of this interest, her fascination for typography evolved which is, in her opinion, a possibility to fill the gap between abstract arts and communication. “You can approach the single letter in an ‚artistic‘ way and then produce a functional system out of it that works effectively”, she says. Her design style consists of “40% rationality and 60% impulse”. “It’s quite eclectic, bittersweet”, Carolina says, “I like clean, rational geometries, blank surfaces, as well as raw sketches and elements of dissonance.”

Just as Carolina, Matteo always had a crush on typography. “It is one of the primary tools for graphic works. It is interesting to me to manage to build this basic element of communication, knowing that it will be used by people with different purposes. You’re not creating a single artwork but a system for hundreds or even thousands of artworks. It’s a different layer of work compared to graphic design.” At the moment, Matteo takes part in the master program of Visual Communication  at Politecnico di Milano. His style is “driven by an effort to overcome a sort of anxiety about having a recognizable style.” He describes it as a “few elements on a plain color background. Maybe something inbetween expressionism and strict minimalism.”

For both of them, collaborations are an important and also necessary part of their creative working process. They see collaboration as a natural consequence of interacting with each other, especially in the era of social media where connecting and sharing contents seems so easily. “It’s important to develop sincere mutual appreciation rather than a sterile competition and therefore combining the good energies in a shared project”, Carolina says. And Matteo adds: “Because of social media we are all more similar to each other, we have the same references. However collaboration is super important for me to question my certainties and reach different outcomes. Collaborations lead not only to strengthen connections but also to enrich your own identity. It helps to think outside the comfort zone.” While Carolina names the Fluxus Movement as an inspiring example how artists can work collaboratively in “an ironic, critique and anarchic way in order to blend different artistic genres”, Matteo names the “It’s Nice That x Dropbox Paper Calls for Collaboration initiative“ as “an inspiring way to connect creatives from different parts of the world and a powerful example of partnership between two companies.”

At the moment Matteo dreams of working on an editorial project, like a magazine, with a writer and a photographer, but he also has many other interests, reaching from 3D typography, variable fonts and kinetic typography. In the future, Carolina would be interested in collaborating with “local realities and people that support and represent subcultures.” From an independent music producer to a tattoo artists, she is open for any sort of collaboration: “Everything’s interesting for me as long as I feel a matching vibe.”